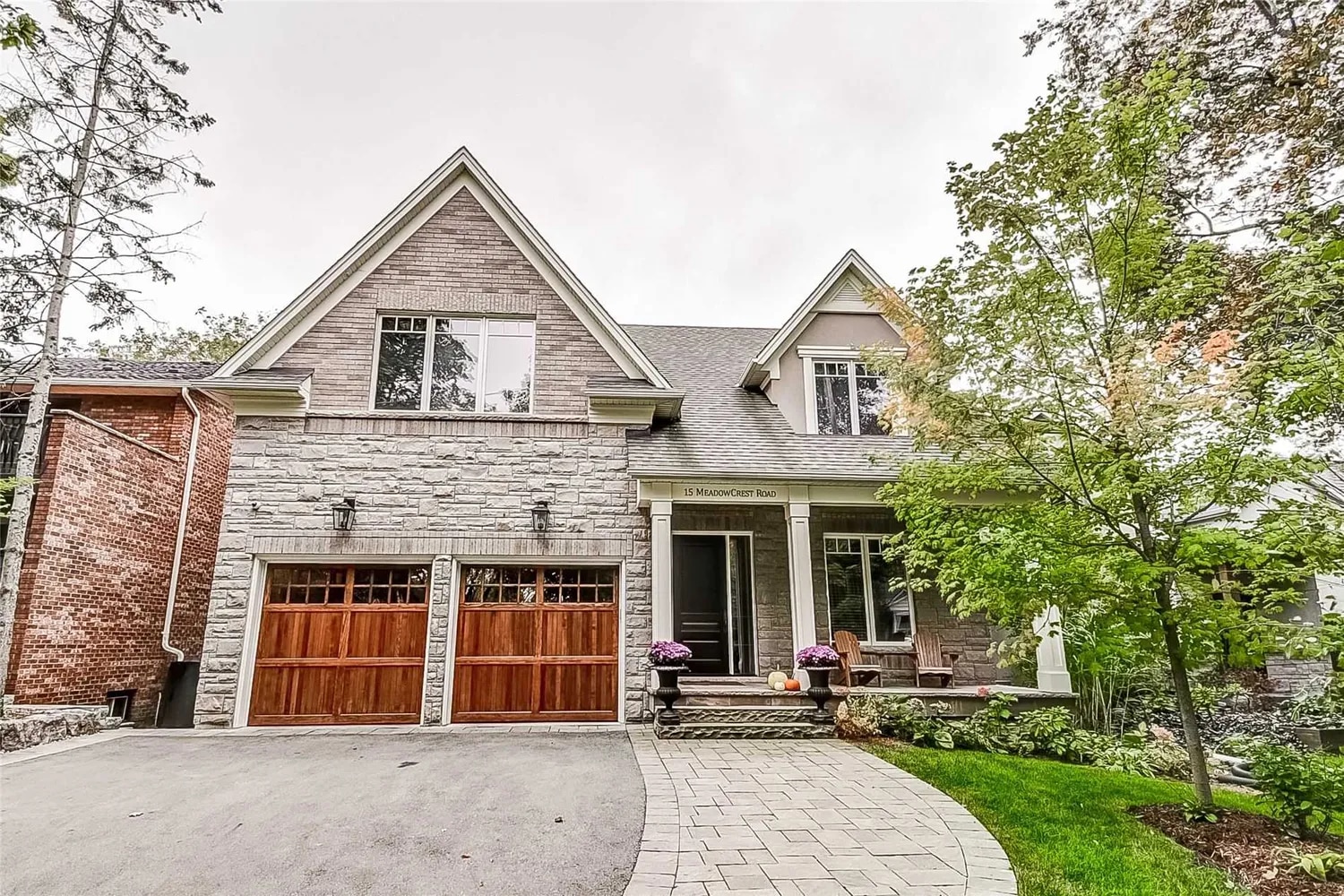 Listed at $3.589-million, realtor Leslie Battle figured at 15 Meadowcrest Rd. in Toronto might sell for as much as $3.9-million. It sold for $4-million, setting a new area benchmark.
ROYAL LEPAGE REAL ESTATE SERVICES LTD.

Current conditions in the Toronto real estate market are the “most favourable to sellers” on record. That’s the frank assessment of National Bank of Canada economist Kyle Dahms, who notes the stock of properties for sale stood at an all-time low in October. 11/17/21, 4:24 PM It’s prime time for Toronto home sellers - The Globe and Mail https://www.theglobeandmail.com/real-estate/toronto/article-its-prime-time-for-toronto-home-sellers/ 2/6 Mr. Dahms’s appraisal will come as no shock to weary buyers who are contending with an unharnessed run in prices and a dearth of listings. Leslie Battle, a real estate agent with Royal LePage Real Estate Ltd., has been passing along the same message to her clients in the Kingsway and other upscale pockets in Toronto’s west end. “If you want to sell, now is the time – and I can get you up-and-running in three days,” Ms. Battle is telling prospective sellers. One owner of a four-bedroom house in the Thompson Orchard enclave in Etobicoke recently told Ms. Battle he was pondering a sale in the spring. The property was already in great shape so Ms. Battle urged the homeowner to list in November while so few homes are on the market. The strategy paid off when Ms. Battle sold the detached house for $4-million after listing it with an asking price of $3.589-million. Ms. Battle expected the house at 15 Meadowcrest Rd. would fetch $3.8-million and might go as high as $3.9-million. But the sale set a new benchmark. “The $411,000 over blew my head off,” she says. “There are no comparables at $4-million.” Part of the property’s appeal was the 50-foot-wide lot set on a slope with the backyard higher than the houses behind it. That semi-ravine creates more privacy, she says. The house itself has four bedrooms, six bathrooms, and luxuries such as an elevator. But buyers don’t typically pay top dollar for a house that’s a few years old. Ms. Battle says that in good, west-end neighbourhoods, $3.5-million is the price buyers pay for “pretty standard fare.” “You’re going to get a really nice house. You’re going to get a decent footprint. But you’re not going to get brand new.” Typically only newly-built luxury homes have traded above $4-million in the past, she says. Now the new homes are selling around the $4.5-million mark. The market has reached that level one or two years ahead of her predicted timeframe.

“Prices are crazy, and it’s nothing but a lack of inventory,” she says. “I think we’re all surprised. I really thought it would level out this fall but that has not happened.” Elise Stern, a broker with Harvey Kalles Real Estate Ltd., is also listing houses now while there are so few competing properties on the market. She knows of many first-time buyers who have pre-approved mortgages and want to strike a deal before interest rates creep up. “There are tons of buyers out there.” Ms. Stern recently posted on her agents’ network that she will soon be listing a twobedroom rowhouse in Little Italy with an asking price of $1.099-million. Within a few hours she had six calls from agents wanting to learn more. Ms. Stern is also working with several buyers who are looking for homes, but she advises them to think carefully about what they want and not become overtaken by FOMO – fear of missing out. “I’m very conscious about not letting my clients buy into that,” she says. “You don’t want them to regret it.” Ms. Stern says houses that are nicely renovated in solid neighbourhoods sell quickly, but properties with a deficiency may not receive multiple offers. Buyers may be put off by a busy street or a house that needs a lot of work. “People aren’t jumping on those,” she says. “It’s not guaranteed that if you list a house, you’re going to get multiples.” She worked with one couple who saw a house that needed some work in the upper village area of Forest Hill. The sellers reduced the asking price and Ms. Stern’s clients were still able to negotiate a better deal. Tanya Rocca, a real estate agent with Royal LePage Burloak Real Estate Services, is still seeing lots of buyers migrating out of Toronto to Burlington and Hamilton and beyond. “They’re pushing farther and farther.” 11/17/21, 4:24 PM It’s prime time for Toronto home sellers - The Globe and Mail https://www.theglobeandmail.com/real-estate/toronto/article-its-prime-time-for-toronto-home-sellers/ 4/6 The house at 15 Meadowcrest Rd. has four bedrooms, six bathrooms, and luxuries such as an elevator. But buyers don’t typically pay top dollar for a house that’s a few years old. ROYAL LEPAGE REAL ESTATE SERVICES LTD. In Oakville, freehold properties change hands for an average price around the $1.7-million mark. In Burlington, a freehold property sells for about $1.3-million. With prices climbing in those areas, Brantford and Paris, Ont. have become more attractive, she says. People are also drawn to the Niagara region so they can be closer to cottages on Lake Ontario and Lake Erie. “It’s getting pricey out in Fort Erie.” Ms. Rocca says many workers have had a taste of working from home and they are willing to commute to an office one or two days a week if it means they can have a larger home and backyard outside of the core. “COVID gave people a new perspective,” she says. “They’ll move to another area and try it.” 11/17/21, 4:24 PM It’s prime time for Toronto home sellers - The Globe and Mail https://www.theglobeandmail.com/real-estate/toronto/article-its-prime-time-for-toronto-home-sellers/ 5/6 Still, the market in her area has calmed compared with the craziness of February and March, she says, adding that she welcomes the cooler temperature. “There are multiple offers but there are also times when there are not multiples.” She says some buyers became worn out by the mania and decided to take a break. “They have to be seriously motivated to keep going.” Ms. Rocca doesn’t expect prices to continue rising at the recent pace that has hit more than 30 per cent per year in some places. “Inevitably this can’t be like this forever.” Mr. Dahms at National Bank cautions that the Toronto market will face headwinds in 2022. With prices at their current level and mortgage rates on the rise, demand may weaken. Mr. Dahms reports that nationwide sales rose 8.6 per cent in October from September on a seasonally adjusted basis. In Toronto, Ms. Battle is still listing properties even as the fall market nears the tail end. “There’s still time but it’s slowing down,” she says. “If you wait until spring, you’re speculating that the market will continue.” Ms. Battle says the outlook for the spring is unpredictable, but she does expect an increase in supply. Interest rates may tick up, but any increases are more likely to influence first-time buyers. She doesn’t expect a significant impact at the high end of the market. Still, with many economists forecasting rate hikes in 2022 and a possible levelling off in house prices, lenders have become more conservative, she says. “It’s very different to work with banks right now – they’re asking for blood.” As for the forecast, Ms. Battle says she will be very interested to see what happens to the balance of supply and demand in 2022. “I’m just going to sit like a bird on the wire and see what the spring brings,” Ms. Battle says with a laugh. “I’m not doing any projections.” 11/17/21, 4:24 PM It’s prime time for Toronto home sellers - The Globe and Mail https://www.theglobeandmail.com/real-estate/toronto/article-its-prime-time-for-toronto-home-sellers/ 6/6 Your house is your most valuable asset. We have a weekly Real Estate newsletter to help you stay on top of news on the housing market, mortgages, the latest closings and more. Sign up today.