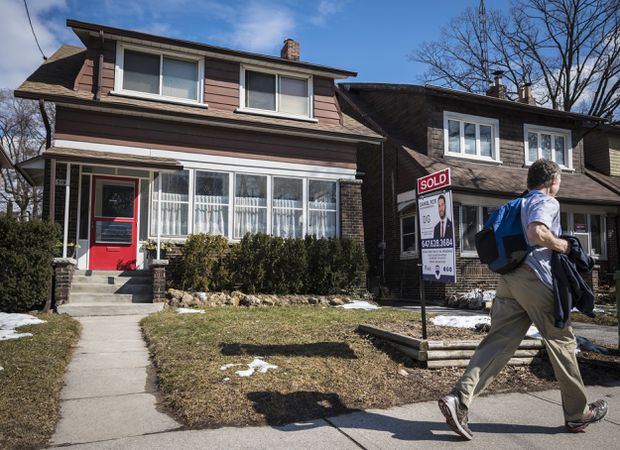 A pedestrian passes a recently sold home in Toronto on March 4, 2020.

Real estate lawyer Mark Weisleder has some pragmatic advice for buyers, sellers and real estate agents facing conundrums around closing deals: “You must find a way to make it work.”

The partner with RealEstateLawyers.ca LLP says the fallout from the coronavirus pandemic is leading to all manner of glitches between the time when a buyer and a seller sign an agreement of sale and the transaction closes.

“We’re in a different world now,” Mr. Weisleder says. “You have to understand what you took for granted can’t happen.”

Some of the issues surrounding real estate deals involve buyer’s remorse. Lenders, appraisers and movers all face disruptions to their way of doing business.

Mr. Weisleder has been sorting through such dilemmas with local real estate boards around Ontario. In February, he couldn’t get five people to join his online sessions, he jokes.

Feelings of buyer’s remorse surface when people who purchased property during the frothy days of February and early March wonder if they paid too much to beat out legions of competing bidders for a property.

Some of those deals were inked during a time when buyers were paying astounding amounts above the asking price and some bidding wars drew 30, 40 or even 70 plus offers.

By mid-March the market stalled as many sellers pulled their listings, buyers largely retreated and the Government of Ontario began imposing increasingly stringent rules around physical distancing to prevent the spread of COVID-19.

Some of those purchasers may lose their jobs or see their income fall before the closing date. Others may worry about the risks of moving during a health crisis. And some may just fear they overpaid.

Mr. Weisleder believes some buyers were unsettled by so much uncertainty.

“People wonder, how is this crisis going to affect prices and values?”

Once an outbreak of COVID-19 was declared in Canada, a lot of consumers were under the impression they could back out of a deal, Mr. Weisleder says.

“It doesn’t work that way.”

He points to April, 2017, when the market fell almost 20 per cent overnight after a foreign buyers’ tax and other cooling measures were implemented by the provincial government. Buyers backed out of agreements and sellers either couldn’t find another buyer or had to sell at a price substantially less than the first buyer agreed to pay.

The buyers who walked away were often under the mistaken impression they could just forfeit their deposit. In the courts, many ended up being forced to pay for the seller’s losses.

April Esteves, a Toronto-based real estate agent with Royal LePage Real Estate Services Ltd., has not come across any deals that have come apart because buyers fear they overpaid before the crisis.

In the opening months of 2020 right up until mid-March, there was huge demand from buyers, she says.

Buyers looking for condos in the $600,000 range up to $1-million or so have had a hard time in competition.

“When they finally do get something, it’s a relief.”

A week earlier, Ms. Esteves says, concerns about COVID-19 were ramping up, so she cancelled the open houses she had planned for the property at 200 Indian Grove in Toronto’s west end. Undaunted, potential buyers booked private appointments instead.

“We had a huge amount of showings.”

“For the most part, people are really happy to get into these neighbourhoods,” she says. “They may have waited a long time.

The morning following that sale, the agents in her office packed up their belongings and began working from home.

Ms. Esteves says buyers have mostly moved to the sidelines and agents are reluctant to take on new listings unless a homeowner urgently needs to sell.

She adds that many agents are also discouraging buyers who are hoping to be opportunistic from looking for a deal now because most people don’t want to visit a property in person.

“I don’t think a lot of agents would take that upon themselves.”

Ms. Esteves says some sales are still happening because an estate needs to be settled or a couple is divorcing. Some people have already given notice on a rental or they are moving into the city for the first time.

She has also heard of a trickle-down effect when it comes to closing time. If one party hits a snag, everyone has to work together to work it out.

For example, if a landlord sells an income property and the tenant doesn’t leave by the closing date, the parties have to work out an arrangement.

“We’re really not in position to force that tenant to leave.”

She says relationships between tenants and landlords, buyers and sellers, and competing agents have all become more co-operative than ever before.

“It really is down to a lot of open communication,” she says. “It’s not adversarial.”

Mr. Weisleder also believes that parties need to be transparent and flexible.

He says some buyers do try to negotiate a reduction in price – which the seller may agree to rather than have the deal collapse.

Mr. Weisleder says he typically urges both sides to reach an agreement, whether that involves an extension of the time until closing or an adjustment to the price.

Mr. Weisleder points out to sellers that suing a runaway buyer may not bring a satisfactory result in any case. A first-time buyer, for example, may not have enough assets to make a court battle worthwhile.

“What’s the point of suing someone who doesn’t have any money? We do our best to get the deal done.”

In some cases, a buyer may want to go ahead with a purchase but may not be able to obtain a mortgage for the agreed-upon price. In that case, a vendor may consider extending a loan – which the buyer can pay back over a couple of years – for the difference between the mortgage provided by the lender and the sale price.

Mr. Weisleder cautions, however, that some lenders do not allow second mortgages, so buyers must beware of the small print.

In cases where an inspection can’t be completed, Mr. Weisleder has suggested sellers offer warranties against flaws in major elements such as the heating and air conditioning system or the roof.

And if an appraiser is reluctant to enter a property, perhaps he or she can wear gloves and a mask and keep the visit very short, the lawyer says. The appraiser may be able to walk around the exterior and come up with an appraisal that satisfies the lender, he says.

“Lenders are being creative too,” he says. “I haven’t heard of deals cancelling because of this.”

In their own practice, Mr. Weisleder and his partners are doing all of their business with electronic document signing and online payments. Upon closing, keys can be sheltered in a lockbox, he says, and the code is supplied to the buyer once they have transferred the money to the lawyers.

Many agents who raise questions during the webinars worry about the possibility of the system closing down, or what happens if there’s a snafu between closing and the time title is registered.

Mr. Weisleder points out many buyers also acquire title insurance to protect against loss or damages from things such as liens and encumbrances. So-called gap coverage, he explains, is designed to bridge that time between closing and registration.

One setback his practice has come across is that the banks still require that funds provided to pay off the seller’s existing mortgage be handed over in the form of a certified cheque.

Mr. Weisleder would like to see that changed to an electronic funds transfer.

“The bank is so set in their ways,” he says. “If it takes a crisis to change this, it should.”