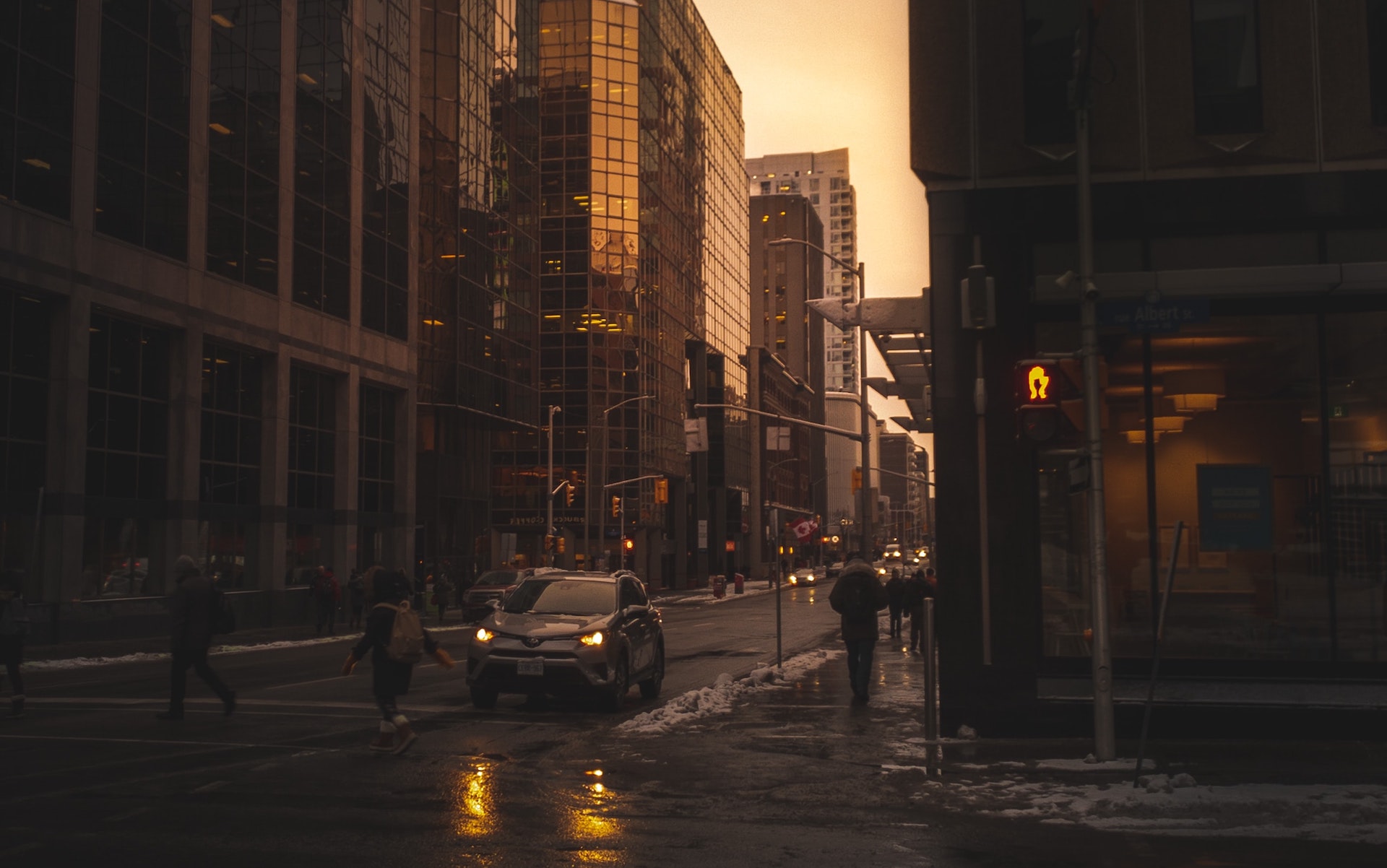 Canadian real estate prices are seeing accelerated growth across the country. Canadian Real Estate Association (CREA) data shows the price of a typical home increased in January. The increase marks the 9th consecutive month of price acceleration for the national index. Prices are now growing at the fastest rate in almost two years.

The 12 month change in the unadjusted benchmark price of a home across Canada. 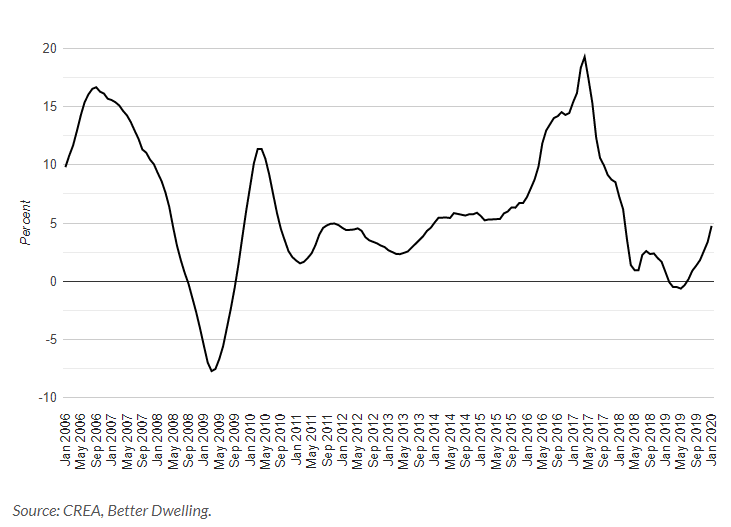 The rate of growth needs a little more focus, since it was such a strong move last month. January’s unadjusted benchmark is 0.80% higher than just a month before. The 12-month rate of growth made the 9th consecutive climb. It’s now at the highest level since February 2018. Price growth acceleration was led by Ottawa and Montreal. Both markets are approaching overheating – at a slow time of year.

The largest price increases were in Ontario and Quebec. Ottawa’s benchmark, a.k.a. typical home price, reached $459,100 in January, up 13.53% from last year. Montreal made the second biggest annual climb with the benchmark hitting $387,000, up 9.74% from a year before. Niagara comes in third with a benchmark of $440,900, up 9.52% from last year. Both Ottawa and Montreal have seen about half the growth Toronto and Vancouver have seen over the past 5 years. 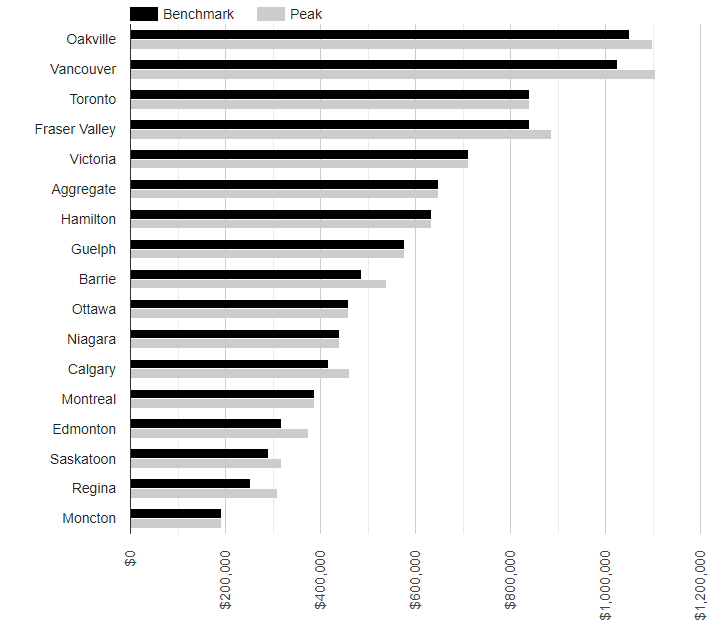 The 1 year percent change in the seasonally adjusted price of a typical home, in Canada’s largest markets.

Nearly half of Canada’s real estate markets are at new price peaks, according to the benchmark. Some markets aren’t quite so lucky, however. Regina prices are the furthest from peak to $252,900 in January, down a whopping 18.21% from peak. Edmonton follows with a benchmark of $317,200, down 15.14% from peak. Barrie, a suburb of Toronto, comes in third with a benchmark of $485,400, down 10.08% from peak. Prairie markets are understandably weaker  since taking a tumble in 2015. Barrie real estate prices are a bit of a mystery, and are up only 2.09% from 3 years ago.

The percent change from seasonally adjusted peak pricing for a typical home in Canada’s largest markets. 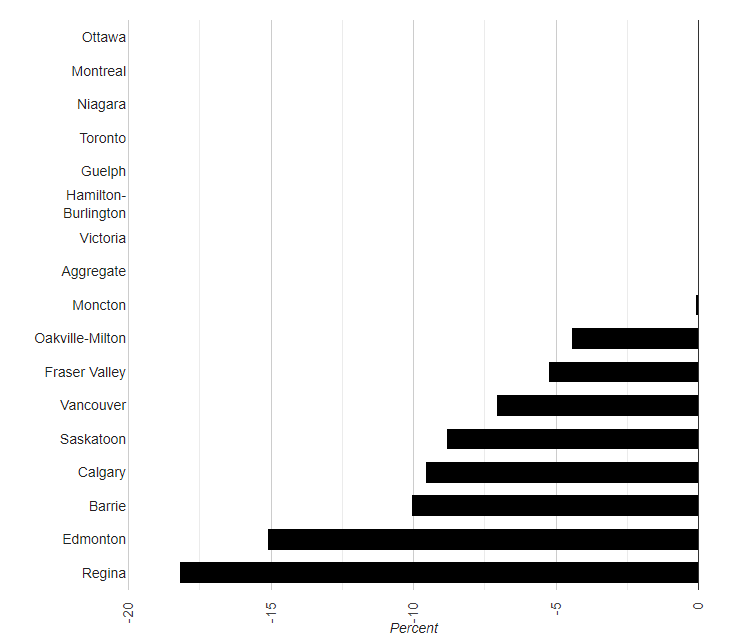 Most Canadian real estate markets are seeing prices rise, and quickly. Markets with the largest annual gains were left out of the national price rally in 2016-2017. However, they’re making up for lost ground fast. The fact that almost all markets are showing large growth, should tell you more about credit than local desirability.